Leaders are self starters but they don’t know that.

Leaders are ahead of the crowd but they don’t know that either.

The reason leaders are self starters is because they are the only one in their camp.

When an idea arrives to fix, to improve or to create they are not usually inspired to say “Hey guys, let’s do this”.

Leaders generally have only one follower, one person on their team; the Leader, the Follower, the Self-Starter  – they are one.

They immediately grab a computer, a paint brush, a chisel with which to create or to discover. The result is then offered to the community

If the contribution shows promise to less creative minds, comes soon a TED talk or a you tube video or the tap on the shoulder from a  watchful entrepreneurial eye whispering a suggestion of possible profits.

And the butterfly flaps its wings and starts the proverbial hurricane. 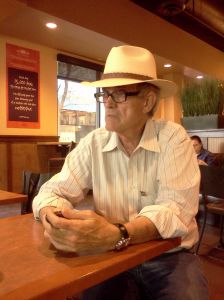 WHAT TO DO WHEN AWAKENING TO DEPRESSION

1. Go to the refrigerator. Place your head into the freezer and breathe deeply five times. The negative ions will perk you up.

2. Take a shower. Splashing drops of water create negative ions which will perk you up.

3. Sit down at the breakfast table and say “Thank You”. (and mean it). If you don’t know who you said that to, don’t fret, it doesn’t matter. Eat breakfast and breathe deeply and exhale before each bite.

4. As you wash the breakfast dishes, clean the dirty edges around the kitchen sink or take a mop to the kitchen floor; do one quick chore which was not in your plan.

5. Go about your day. If you find yourself looking down, raise your eyes and look for the eyes of another, peer into them and say “Hi, how’s it goin’ “ (and mean it).

WHAT TO DO WHEN AWAKENING TO A LOVELY SPRING DAY

As the poet who shared this sentiment. Lee-poet

The next time you hear yourself complaining that everyone looks and talks alike and that you would like to hear some fresh ideas for a change, leave your car at home for a day or so and take the light rail.

I YAM WHAT I YAM

“Do you ever feel like a comic strip character?” This was the topic of conversation at a weekly dinner with  some pals of mine last week.

“My secret self is Popeye; who are you?”

When I first approached this train of thought, I was alone at my desk, wondering what I wanted to write about and the thought crossed my mind about playing cops and robbers as a boy. Or Cowboys and Indians. Or Alley Oop.

So who am I when I make that first call to a prospect or when I answer a call from a troubled client or write up an order for my favorite customer?

What hat am I wearing when I ask a lady for a dinner date?

Is there a cape in my imaginary closet?

A turned around collar?

Our lives begin with affirmation.

By the time we are eighteen months old we have mastered the challenge of scientific observation and established our most basic methods of coping with fear. We know to act innocent or guilty, we are aggressive or pleasant, we push and we pull.

For the next couple of decades we will be creating our personas, aping lines from songs, the latest styles and speech patterns and our most private thoughts will be linked somehow to the need for approval either for protection from violence or for good vibrations as saluted by Mike Love in the sixties.

And if from all of this there emerges a goal for defining our true selves chances are we shall all benefit from this, including the servant.

If that goal is totally self-serving everyone wins but the servant.

This is a time of year where we all join hands.

The most important ingredient common to the lives of  artists, inventors, scientists, and composers and those who follow  is Freedom.

Without this precious necessity we become redundant clones who will go to any lengths to gain the approval of society.

We Accept the Love and we pass it on.

We Listen to the Birdies.

We Dance to the Music.

We Accept the Day ; we create The Morrow

We Accept the Love and we pass it on.

We accept the Gift and we pass it on.

The Gift of Love is Freedom.

We pass it on.

Whoso would be a man must also be a non conformist. –Ralph Waldo Emerson, Essays: First Series

Follower: “What should I do?”

Seasoned Follower: Sounds a little bit like a True Leader. Always carries a book written by an actual True Leader.

Voice in the Crowd: Could be anybody, a True leader, A Seasoned Follower, a Non-conformist-Anybody, Anti-conformist; anybody, really.

Voice in the Crowd: Who wants to be our leader?

Seasoned Follower:  I do.

Voice in the Crowd  Go ahead then. You shall be our leader.

A Child in Their Midst:  I think the Voice in the Crowd should be our leader.

Though coming from the lips of one so young, the idea seems to resonate throughout the crowd; the followers quickly vote
amongst themselves and elect the Voice in the Crowd to be their Leader.

Voice in the Crowd: No, No; please, I don’t want that responsibility, really; I spend most of my time writing. I don’t have time to be a Leader.

The Child in Their Midst: I have an idea; you continue to spend your days writing and I’ll come over every morning and edit your written words; I’ll even create a blog, And, I could make a movie of you at work and publish the video on YouTube. I’m little; you won’t even know I’m there. And you, Mr. Voice in the Crowd, can continue your daily activities undisturbed by your followers plus…. your followers will have a new Leader.”

The Voice in the crowd appears to mull this idea over, eventually relaxing his furrowed brow, replacing the worrisome stress indicator with a big, wide smile on his lips which is in turn, greeted by a resounding salvo of energetic hurrahs and this group of followers celebrates the fact that they now had a new Leader. Of course they all think that their new leader is Mr. Voice in the Crowd but you and I know that the True Leader is the little girl, the Child in Their Midst,  who saves the day.