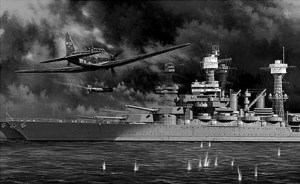 December seventh , 1941
7:53 AM: The first wave of the Japanese attack on Pearl Harbor. Within minutes crippled battleships began to sink.

8:55 AM. The second attack lasted less than an hour. 2,403 people died. One hundred and eighty-eight airplanes were destroyed. Eight battleships were left with little to salvage.

A young man clad in olive drab uniform was on his knees, his head still slightly above that of his two and a half-year old son. They were in a second floor walk-up, a one room apartment in not too bad section of town a few blocks north of downtown Oklahoma City.

“Bobby, Uncle Sam has ordered me and a lot of other fathers to defend our country from the Japanese.” said the young father. With the news coming over the radio Bobby had added to his vocabulary some new words and phrases among which were Uncle Sam, Japs, Pearl Harbor and Battleship.

Father went on to talk about Pearl Harbor. He explained to his son that Bobby was now the head of the household and that as such, he had to take care of the family. Hundreds of thousands of young fathers were passing on the mantle of masculine responsibility to their sons and their sons understood.

And so did Bobby. But for this young man it was obvious that this was more than a common American ritual of the day.

As Bobby nodded his head yes, he was very aware of his assignment. This was not a new list of duties that had to be carried out on a daily basis; this job already had a job description and Bobby had been writing it and reaffirming it on a daily basis for some time now. Bob senior had been pulled away from a job as a valet at the parking garage a few blocks away at the Black Hotel; his studies at Oklahoma City University had also been interrupted. Bobby was already caring for an alcoholic mother and a six month old baby brother and had been for months now.

He hugged his father and watched with caution as his Mother said good-bye to her husband with a cursory hug and a peck on the cheek. And his job officially began as he held mother’s half empty bottle of beer while she bade adieu.